Value in Healthcare - Part 1: What is Value?

Dr. Victor Lee is the Vice President of Clinical Informatics at Clinical Architecture.  This is part 1 of his blog series addressing the topic of value in healthcare.

It is well known that the United States is at the top of the leaderboard in rankings of health expenditures as a percentage of GDP. Although not new, discussions about value in healthcare have gained a lot of momentum in recent years, perhaps reaching a feverish pitch when the Centers for Medicare and Medicaid Services (CMS) announced specific goals to shift reimbursement from fee-for-service (FFS) to value-based payment models and when congress passed the Medicare Access and CHIP Reauthorization Act of 2015 (MACRA).

What does this mean? A good place to start would be to define what “value” means in a healthcare context. While there may be variations in definitions and opinion across payers, providers, and patients, perhaps the most commonly accepted general definition was proposed by Michael Porter when he stated that “value is defined as the patient health outcomes achieved per dollar spent.” By this definition of value, simply doing more does not necessarily translate into value. Rather, one must perform not too much or too little in the provision of healthcare services—providers must deliver the right amount of the right interventions that are cost-effective in order to maximize value. Since our healthcare delivery system has been traditionally based on FFS models the incentivize a higher volume of care, there is much work to be done to transition our nation’s focus onto value of care.

As with any form of complex system change, it can be helpful to measure progress toward our goals. The Health Care Payment Learning and Action Network (LAN) is a collaborative network of public and private stakeholders who are tasked with accelerating the adoption of value-based payment. The goal of the LAN is to align private payers and CMS in moving payment from traditional FFS methods to FFS-linked to quality and alternative payment models (APMs). One of the first work products from the LAN was the APM Framework which built upon a seminal article and supplement by CMS. 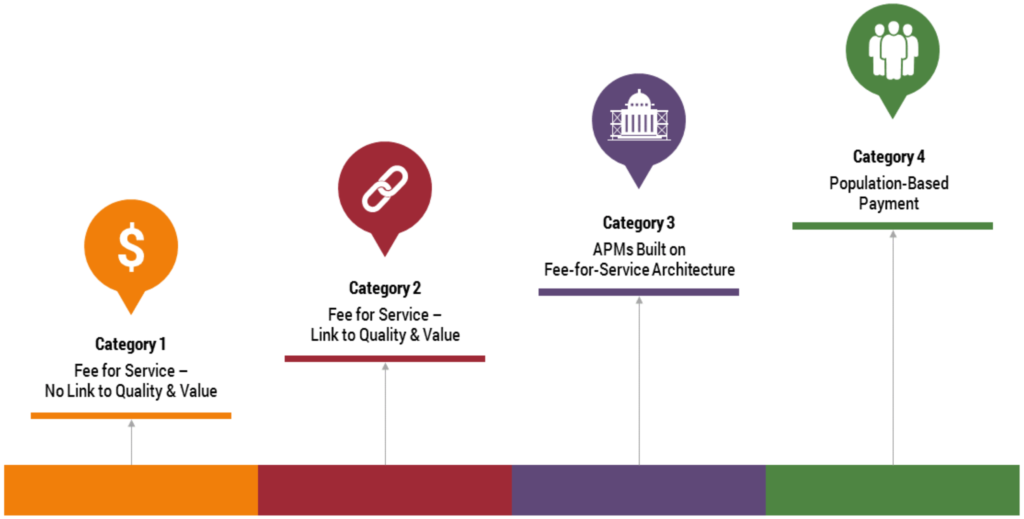 In the APM Framework, Category 1 is plain FFS without any link to quality or value and has more or less been the historical norm since the enactment of Medicare and Medicaid in 1965 and since the advent of healthcare as an industry for that matter. Payment innovation programs in the public sector largely stem from efforts through the Center for Medicare and Medicaid Innovation (CMMI or “CMS Innovation Center”) which develops and tests payment and service delivery models across categories 2 through 4, so most of my writings will focus on those programs, with recognition that private insurers have analogous programs.

Category 2 represents FFS with a link to quality and value. Examples include mandatory pay-for-performance programs such as Hospital Value-Based Purchasing (HVBP), Hospital Readmissions Reduction Program (HRRP), and Hospital-Acquired Condition Reduction Program (HACRP) in which a “small” proportion (usually up to approximately 3% which can still add up to millions of dollars depending on the size of the hospital) of payments are dependent on quality, safety, and efficiency metrics.

Category 3 programs up the ante by linking payments to the management of subpopulations or episodes of care. That being said, they are still based on a FFS architecture. Examples include accountable care organization (ACO) programs like Medicare Shared Savings Program (MSSP), Bundled Payments for Care Improvement, Comprehensive Care for Joint Replacement, and many others including numerous private health plans. Some proponents make the case that bundled payments represent the most promising path forward to moving our nation to value-based care.

Category 4 payment models such as the Pioneer ACO Model (in years 3-5) and Maryland All-Payer Model are perhaps the most challenging to implement because payments are linked to the number of beneficiaries rather than service volume, so they are a complete departure from FFS. Providers are given capitated per-person payments over a certain period of time, and they must manage expenditures while furnishing all necessary health care services for their defined populations. Providers profit if they keep their populations healthy and spend less than the capitated payments they receive, but they can lose money if they are unable to deliver effective and efficient care. Some proponents assert that population-based payments are the best approach to aligning provider financial incentives in moving our nation to value-based care.

In the APM Framework, categories 3 and 4 are considered APMs due to the risk-bearing nature of those payment programs that drive providers to significantly change the way they practice. Namely, those programs require providers to share health information and coordinate care across providers and venues because they are accountable for both the quality and cost of care. In any case, definition of the APM framework laid the foundation for setting some important goals. In January 2015, CMS defined the following goals in relation to transitioning to value-based care: 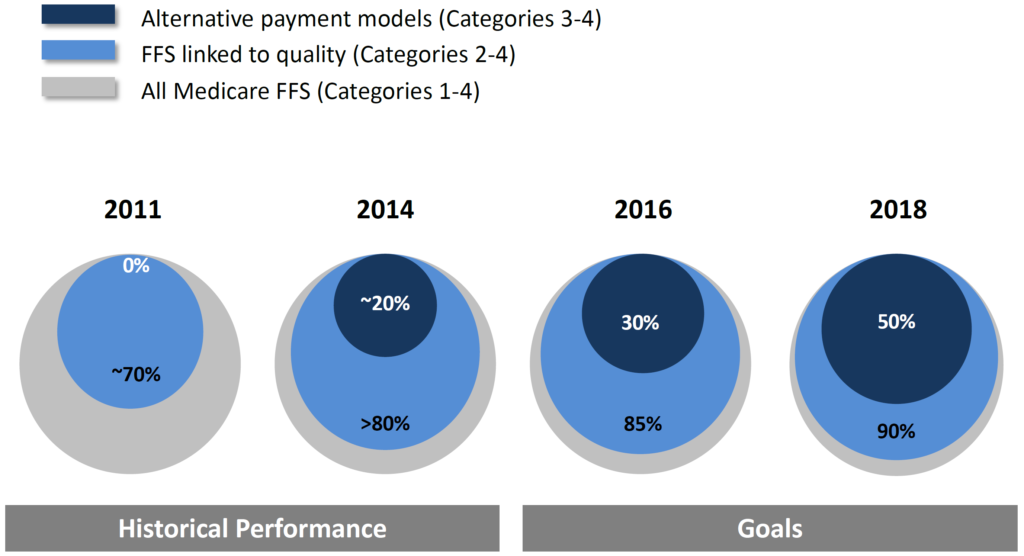 Surprisingly, CMS announced in March 2016 that it had achieved its 2016 goals approximately 11 months ahead of schedule. It went on to explain that with many new enrollees to Medicare ACO programs, “an estimated 30 percent of Medicare payments are tied to alternative payment models as of January 2016.” Let’s be clear on what this means. The percentages are in reference to payer reimbursement models which is only a starting point. This has numerous implications for what must happen downstream on the provider side.

Providers must adapt to evolving payment models by changing the way they work. They must rely on new technologies and solutions to share data and communicate with other providers to reduce duplication of services. All this must be achieved using health information technology that is evolving with rapidly changing legislative and regulatory requirements. And to further complicate matters, the “shift” to value-based care that we often speak of may be more accurately characterized as a “slow drift” in the sense that providers do not enter APMs and reinvent their practices overnight. Instead, providers must operate in a gray area for some period of time during which they may have payment arrangements spread across 2 or more of the 4 categories in the APM Framework. During this time, there will be variations of mixed incentives to deliver volume-based and value-based care. Providers may have one foot in a FFS model and another foot in an APM. It’s like playing Twister but with financial penalties for falling down.

Therefore, it may come as no surprise that despite progress with APMs on the payer side, we’ve seen providers hit some speed bumps along the way. For example, the Pioneer ACO program was perhaps the most high-profile CMS ACO program at the time, with participants largely viewed as healthcare leaders in terms of organizational readiness for payment innovation and delivery system reform. However, after a whiz-bang launch in 2012 with 32 ACO participants, the program saw attrition (with many participants moving to other models such as MSSP), the Pioneer ACO program concluded at the end of 2016 with only 8 ACOs. It’s clear that transitioning to APMs are not just a walk in the park.

Even taking “smaller” steps into category 2 payment models can be challenging. Results from the 3 mandatory pay for performance programs mentioned earlier (HVBP, HRRP, and HACRP) reveal that many hospitals are unable to escape penalties, and if you’re a data geek like me, you can download FY 2017 raw performance data for HVBP and HRRP as well as HACRP.

In summary, with the rising cost of healthcare, there is an urgent need to focus our incentives and efforts on value, but there is no single proven method that will help our nation achieve our goals at scale. However, we can innovate, learn, and adjust our approaches along the way. As a guiding light, I believe that the Triple Aim of better care, healthier populations, and smarter spending that was proposed in an article by Berwick et al nearly a decade ago still apply today. The authors propose 3 indicators of progress:

Where are you along the path to value-based care, and what other progress indicators do you feel are important to you or your organization?

A Vision for Better Health and Health Care