The ICD in ICD-10-CM stands for “international classification of diseases”, the “10” is the revision, and the “CM” stands for “Clinical Modification”.

(It should be noted that there are other ICDs as well, ICD-O-3 is an oncology classification used by cancer registries.  They are not related ontologically in any way.  But that is the subject for another post).

Along Time Ago in a Green House Far Far Away…

The origin of the ICD goes back to the late 1700s.  French physician and botanist, François Boissier de Sauvages de Lacroix, published his treatise, "Nosologia Methodica" in 1763.  Sauvages, as he was known, was one of the early nosologists (nosology = the branch of medical science dealing with the classification of diseases) that inspired many who followed in his footsteps.  The drivers for many of the early attempts at establishing these classifications schemes were related to tracking morbidity statistics (take that population health!). Sauvages died at the age of 59, three years after his treatise was published.  In a twist of irony, I was unable to find a record of his cause of death.

Jump forward to 1860.  At the International Statistical Congress held in London, Florence Nightingale made a proposal that ultimately resulted in the first model of systemic collection of hospital data for the purposes of tracking causes of death.

In 1893, the “Bertillon Classification of Causes of Death” was introduced by Jacques Bertillon, a French physician.  This classification system was based on the principle of distinguishing between general diseases and those localized to a particular organ or anatomical sites.  In 1900, it was adopted by the American Public Health Association (APHA) and was re-branded as the “International Classification of Causes of Death”.  At this time the ICD contained 161 primary codes (some with modifiers).  The code was a number and the modifier was a letter. For example:

B) by corrosive substance
What is interesting is that this common way of presenting a list (that we all use) has over time become the pattern for structuring an identifier.

I have included a few excerpts from the “prefactory” of the pamphlet provided to the assembled reviewers.
“The time is especially suitable for the general adoption of a uniform classification of causes of death, to the end that the mortality data of the coming century may be more thoroughly comparable than at present.”

When you reflect on it, it is both amazing and terrible to consider that the topics and issues we discuss today are not that different than those discussed over a century ago.  I especially like the last sentence as it shows they understood that terminologies in healthcare are not static and will undoubtedly drift over time … a concept many people fail to grasp in healthcare IT today.

At the conference in 1900 they also decided that they would meet every 10 years to review and revise the ICD. 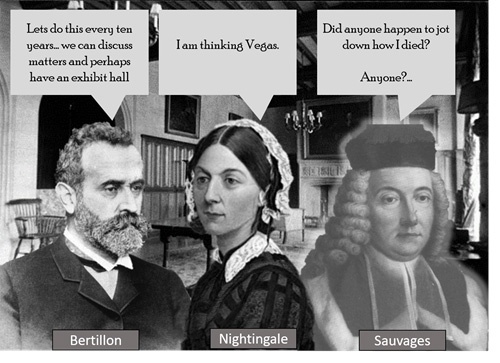 What we have here is an origin story.  Like every good origin story you examine the event that created our hero (or villain) to determine why they chose the path we find them on today.  For ICD, it started out about death.  “What killed these people?” was the question it was meant to answer and track.  It was also about statistics, not about a patient (they were already dead…).  This makes sense because at that time the available technology (paper) could only be used retrospectively and with much effort.

For many cycles minor revisions were made.  In 1946 the 6th revision (ICD-6) was released. This revision expanded the ICD to include morbidity as well as mortality conditions and was renamed accordingly to “International Statistical Classification of Diseases, Injuries and Causes of Death”.  The addition of injuries and diseases also introduced the need to add new modifiers for anatomic location.  This revision also introduced the alphabetic index to accompany the tabular index to aid in finding the appropriate code as the number of terms had increased significantly.

This is the point at which ICD shifted from a focus on death to a focus on people's problems … and death.  This allowed people that were tracking statistics retrospectively to evaluate not just what killed people but also what was hurting and afflicting people. This was especially useful when assessing the labor force or your military capabilities.

The 9th revision (ICD-9) was introduced in 1975 and once again ICD was expanded.  This time there was a contingent who wanted to use the ICD to evaluate medical care.  To do this they wanted to revise the taxonomy itself to have an organ system focus and wanted additional detail. This was in part due to the advent of data processing systems (and might be loosely related to the popularity of disco … but I have no evidence to support that).

Up to this point, consumers had been using ICD for statistics and retrospective reporting for decades.  Now, a new group of consumers are introduced who need a code system in order to document what is happening to a patient for tracking and billing.  One use is population reporting and the other is, arguably, clinical.  The two groups disagreed about how they should proceed at the time, based upon the two different use cases.  In the end, they decided to compromise and leverage the ICD for these two distinctly different purposes.  This is the point, dear reader, when our hero became a villain. (Insert ominous music of your choice here).

Why would I say this? I believe when you take a terminology designed to solve a specific problem and try to use it to solve another, different, problem you create an architectural compromise. Once compromised, the appropriateness of that terminology for either use case becomes fuzzy, as each end pulls aspects of the architecture to suit their disparate purposes.  After a while, the terminology is so compromised that it becomes unwieldy and is not suitable for any purpose. (Climbing down from my soapbox…)

It has been almost 40 years since ICD-9 was introduced and we, here in the United States, are still essentially on that revision. The most recent version has about 17k terms.

ICD-10 was introduced in 1990 (yes – a quarter century ago).  This international version of the classification is used in about 100 countries for cause of death reporting and statistics.  Some countries, like Australia and Canada have modified versions.

The current version of the standard international ICD-10 has just shy of 18,000 terms.  It's major difference from ICD-9 is the coding scheme which has shifted from numeric to alpha-numeric. (because remembering codes is like cheating...).

Today in the United States we are set to adopt an expanded version of ICD-10 called ICD-10-CM, where the CM stands for Clinical Modification.  The "modified" version is significantly different from ICD-10 in that it expands each of the standard ICD-10 codes with additional granularity (like laterality, trimester, encounter type and complications).  It also adds a number of causes, places, activities and other healthcare codes.  The net result is a classification system with over 90,000 codes.

ICD-10-CM is the version we will explore in the next post in this series.

Here is a graphical timeline showing the classification name, focus and polulation.  I am not a historian so if I missed something or got something wrong, feel free to let me know. 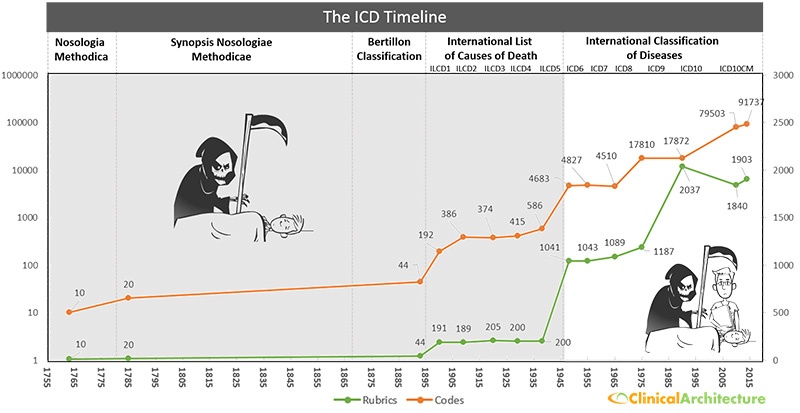