The Road to Precision Medicine – Part VII – The Road Not Taken

On September 12, 1962, President John F. Kennedy delivered a memorable speech at Rice University in Houston, Texas.  It is sometimes referred to as the “We choose to go to the moon” speech. (The full transcript and a video can be found here.)

The speech was made during the Cold War and “Space Race” with the Soviet Union. The president explained to the American people his reasons for supporting a manned expedition to the moon.  It is a good speech and I recommend giving it a listen.
I am referencing it for two reasons.

The first is because the speech contains several great lines that speak personally to me, specifically when I think about why I put down roots in this challenging and frustrating industry.  Here are a few of them:

“All great and honorable actions are accompanied with great difficulties, and both must be enterprised and overcome with answerable courage.”

“We set sail on this new sea because there is new knowledge to be gained, and new rights to be won, and they must be won and used for the progress of all people. For space science, like nuclear science and all technology, has no conscience of its own. Whether it will become a force for good or ill depends on man”

And the most famous Quote:

“But if I were to say, my fellow citizens, that we shall send to the moon, 240,000 miles away from the control station in Houston, a giant rocket more than 300 feet tall, the length of this football field, made of new metal alloys, some of which have not yet been invented, capable of standing heat and stresses several times more than have ever been experienced, fitted together with a precision better than the finest watch, carrying all the equipment needed for propulsion, guidance, control, communications, food and survival, on an untried mission, to an unknown celestial body, and then return it safely to earth, re-entering the atmosphere at speeds of over 25,000 miles per hour, causing heat about half that of the temperature of the sun--almost as hot as it is here today--and do all this, and do it right, and do it first before this decade is out--then we must be bold.”

That brings me to the second reason I am referencing this speech… they did it. 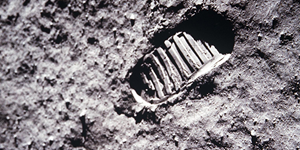 This herculean undertaking was completed and they landed men on the moon before the end of that decade.   Granted, it was a priority of a galvanized nation that was willing to spend $25.4 billion on it over 10 years, but it is still an amazing achievement.

Fun fact: In 2015 dollars, that would be $155 billion over 10 years or $15.5 billion a year.  According to the Government Accountability Office, duplication of federal programs and services costs taxpayers $45 billion annually.

Essentially, a 1 GB USB memory stick is more powerful than the computers that put us on the moon.

In a span of less than 10 years, a team of engineers did something amazing.  They invented technologies that did not exist.  They solved problems that could only be speculated about; like what it would take to land on the moon surface…

It begs the question…why is it so difficult to create a clinical platform with the characteristics necessary to assist a provider in a meaningful way?

According to a 2013 report by Technology Business Research, spending on Healthcare IT in that year exceeded $30 billion dollars.   That seems like a lot of money to me.

Is it technological limitation?

Of course not.  I have a super computer in my back pocket that knows where I am, how many flights of stairs I have climbed and if it is supposed to rain tomorrow.

Is it the people?

I have worked in other industries.  My empirical assessment is that the people who work in our industry are some of the most innovative, brightest, passionate and dedicated people I have encountered in my professional career.

Is it the subject matter?

Healthcare is difficult and scary, it’s true; but I have to say that I have seen people more upset about a banking application losing a penny than a healthcare application losing a critical patient allergy.  Part of this is due to the fact that we still rely on the human provider to do all of the heavy lifting and the human patient to remind the provider by filling out forms…over and over again.

Building smarter and more helpful solutions in healthcare is a solvable problem.  I am not talking about software practicing medicine.  I am talking about software that can accurately store, share and represent patient information in a useful way and periodically give the provider advice and help them avoid critical mistakes.  This is not rocket science (you see what I did there…).

Change is difficult.  Change in an environment where you are always “on” is even more difficult.  I have worked in hospitals and to say they are complex orchestrations of systems and software would be an understatement.  It is also easy to take comfort in the known, even if the known is antiquated and limited.

Perhaps.  Historically we built systems in Healthcare that were driven by revenue; charge capture and billing for services.  This resulted in less than wonderful clinical capabilities because the clinical aspect of healthcare was not our focus.  That was a problem for the human provider in the equation.

Today, I fear we are doing something similar.  We are providing incentives for things like specific outcomes and mandating “meaningful use” standards based interoperability.  These things are done with the belief that the tail can, in fact, wag the dog.   I am not so sure.  I think our priority should be assisting the provider in caring for patients and helping them scale their ability to provide that care.  Directing our intention elsewhere is a distraction, even if it is a lucrative one.  I believe if we do our jobs well and providers do their jobs well, patients will have better outcomes.  I am not sure this is something we can legislate.

The Road to Precision Medicine

Regardless of what barriers have stopped us, it is time we begin our journey down the road that leads to a clinical platform that can assist providers. It will be difficult, and innovation will require periodic failure to work its magic.  If we could land a man on the moon in less than 10 years, we should be able to have  smarter clinical platforms in five. (Technically, we have been talking about CPOE since 1998…).

All of us, in Healthcare IT, have an opportunity and an obligation to create solutions that usher in a new era of provider efficiency, patient satisfaction, clinical understanding and improved outcomes.

At Clinical Architecture we will do our part.  Our mission is building foundational components for smarter clinical platforms that will enable our partners to accomplish amazing things.

If you are interested in exploring how Clinical Architecture could work with your team to continue your journey, we would love to hear from you.  Drop us a note and let’s see what we can accomplish together.

I hope this series has been interesting and entertaining.  I appreciate any feedback, comments or observations.

I shall be telling this with a sigh

Two roads diverged in a wood, and I—

I took the one less traveled by,

And that has made all the difference.

Frost, Robert. “The Road Not Taken.”
The Norton Anthology of Poetry. 4th edition.