In this post we are going to start digging into LOINC.  While this is meant to be a critical review, I need to say that I am a fan of LOINC and respect the amount of effort and discipline that is required to build and maintain a terminology.

First, Everything I learned about LOINC is based on information and data that came from the LOINC website.  If you are interested in making the most of LOINC, I recommend you check it out.

As I mentioned in the first post of this series the mission of LOINC is “to facilitate the exchange and pooling of clinical results for clinical care, outcomes management, and research by providing a set of universal codes and names to identify laboratory and other clinical observations.”

So the objectives are to:

And this is accomplished by:

If you read the previous post, this may seem familiar.  The objective of LOINC seems to coincide with the objectives in the pharmaceutical industry in the mid-80s relative to data combinability.

We will get into the structure of LOINC later, but I think it is a safe bet that when LOINC began it was focused on laboratory observations and the “other clinical observations” was added later.

We humans have a peanut-sized part of our brains called the amygdala (no, I am not talking about Luke Skywalker’s mom…). The amygdala assesses whether a situation is dangerous, then fires signals to other parts of the brain.  When I hear words like “other”, “miscellaneous” and “universal” my amygdala says {Do you hear that?!?}  My latent informatics super powers notwithstanding (eat your heart out spiderman) this is largely based on years of observing unintended consequences of good intentions in terminology evolution.

For now, let’s pretend that the “other clinical observations” does not exist and just focus on “laboratory observations”.   We will come back to the “other” part of LOINC later.

You can download the official LOINC data from here.  I typically download LOINC in MS Access format.  I am going to provide a high level overview of the structure of LOINC but I strongly recommend the LOINC manual as a great source of more information for those that want to do a deeper dive.

The LOINC code itself is a 3-7 digit sequential base number followed by a required hyphenated check digit (0-9).  Regenstrief recommends you support a 10 character field to allow for future expansion.  Obviously, unless you enjoy calculating check digits, you would store the LOINC code as text not as a number.  The number itself is a ‘dumb number’, in that it has no inherent meaning in and of itself.

Each LOINC code has an associated term.  The term has several incarnations.  There is a short name, a long common name and the distinct parts that describe the term. Initially we will focus on the parts.

A given LOINC Term is comprised of six major parts (with a total potential of 16 parts when you factor in optional sub-parts and sub-classes). {Do you hear that?!? }

Here are the major parts:

If you are going to dig into the Official LOINC data, with a focus on lab results, the first thing you need to do is prepare your working subset.  To do that you need to do the following:

For those of you playing the home game… here is the query I am using.

This results in a list of about 41,313 distinct LOINC terms in the database I am working in.

According to the LOINC documentation there are a number of columns that are no longer updated, deprecated or for internal use.  I create a view that allows only shows rows that are useful. These are the following:

Here is the query (combining the useful columns and the term filters from above):

In the next post we will dive into the component part of the LOINC term and discuss some strategies that can simplify your life, if you are trying to map to or use LOINC. 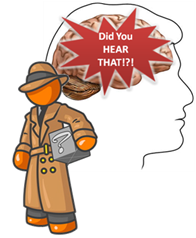 Amygdala hijack is a term coined by Daniel Goleman in his 1996 book Emotional Intelligence: Why It Can Matter More Than IQ. (it would also be a cool name for your band...)

The amygdala is responsible for our fight or flight response.  This function, that evolved very early, is designed to react in milliseconds to perceived danger without thinking twice.  The term Amygdala Hijack is used to describe emotional responses from people which are out of measure with the actual threat because it has triggered a much more significant emotional threat.

Know the signs... and remember to apologize.