According to a report from the National Institute on Drug Abuse, the misuse and abuse of opioids is associated with a staggering number of emergency department visits, hospitalizations, overdose deaths, and many other adverse outcomes. One organization estimates the economic impact from 2001 to 2017 to be more than $1 trillion, with a projected $500 billion of additional cost through 2020 at current rates. The White House Council of Economic Advisers estimates a burden of $504 billion in 2015, stating that prior estimates of the economic costs of the opioid crisis undervalue overdose fatalities. On October 26, 2017, the opioid crisis was declared a nationwide public health emergency. 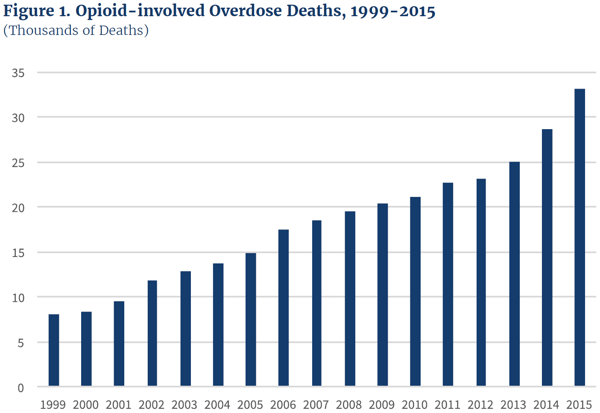 There are efforts to combat the opioid crisis at many levels including government (federal, state, and local), professional societies, health systems, health plans, academic institutions, and health IT vendors. Let’s look at a few selected recent events. The President’s Commission on Combating Drug Addiction and the Opioid Crisis provides a multifaceted set of 56 recommendations across categories that address federal funding, prevention, and treatment of opioid addiction. The Centers for Medicare & Medicaid Services issued a final rule which implements the Comprehensive Addiction and Recovery Act of 2016 and states, “a sponsor can limit at-risk beneficiaries’ access to coverage for frequently abused drugs beginning with the 2019 plan year. CMS will designate opioids and benzodiazepines as frequently abused drugs.” The Institute for Healthcare Improvement summarizes 4 main drivers to reduce opioid use, one of which is to limit the supply of opioids.

The Role of Opioid Prescribing as a Contributor and a Solution

Why is it necessary to limit the supply of opioids? There is clear evidence that the prescription of opioids for pain management is a major driving force of the opioid crisis in the United States. A case-cohort study by Bohnert et al (2011) links higher opioid doses with opioid overdose death among US veterans. A retrospective cohort study by Brat et al (2018) shows that compared with opioid dosage, opioid prescription duration is even more strongly associated with misuse and overdose in a general surgery population. Findings from a series of structured interviews by Cicero et al (2017) reveal no qualitative differences in the onset and progression of opioid substance use disorder between medically treated patients and recreational opioid users. A review article by Compton et al (2016) provides further discussion of opioid prescriptions resulting in non-medical opioid and heroin use and cites numerous references. In summary, the body of research on prescription opioids shows a consistent link with resultant substance use disorder and suggests that the demand side of the opioid crisis is critically important to address.

Source: Cicero et al. Understanding the demand side of the prescription opioid epidemic: Does the initial source of opioids matter? Drug Alcohol Depend. 2017 Apr 1;173 Suppl 1:S4-S10.

Prescribers of opioid medications are in an excellent position to fight the opioid crisis. While there are numerous evidence-based guidelines, a reasonable starting point would be to follow the CDC Guideline for Prescribing Opioids for Chronic Pain for appropriately selected patients. There are 12 recommendations which are summarized in an infographic and the following figure: 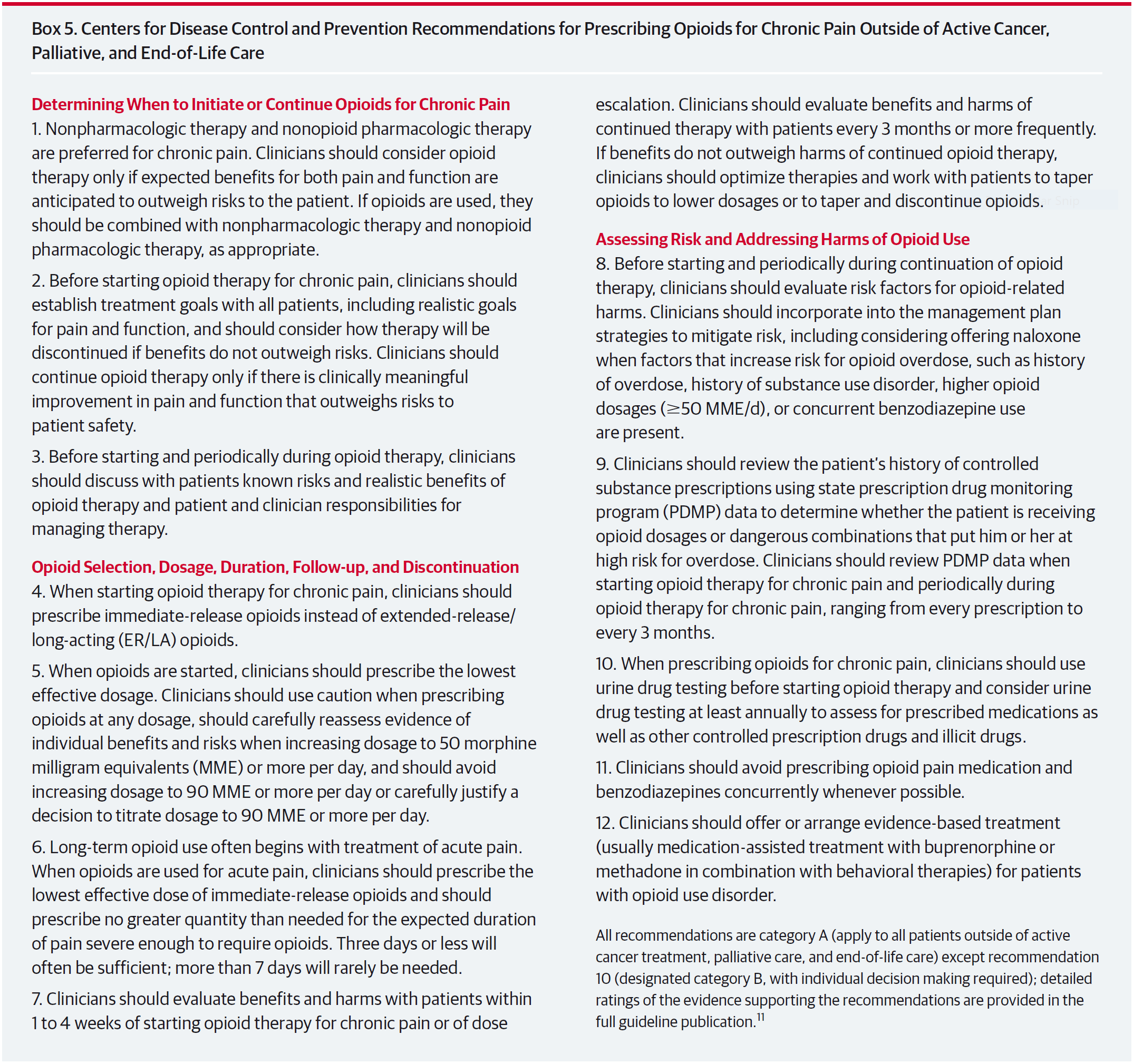 Recognizing that other opioid prescribing guidelines exist, the CDC guidelines are most commonly referred to by numerous organizations as part of a multifaceted approach to mitigating the opioid crisis.

While guidelines, clinical trials, reviews, and other literature may be widely available, they are not always translated into practice when applicable. This is where clinical decision support (CDS) may help. Kawamoto et al (2005) systematically reviewed the literature and found that the automatic provision of CDS as part of clinician workflow is 112.1 times more likely to improve clinical practice as compared with control groups (P< 0.00001).

This is where Advanced Clinical Awareness (also known as “inferencing”) may be of help. Inferencing empowers users to perform rules-based automated reasoning by leveraging structured clinical data to draw assertions and provide recommendations, along with instance evidence and references. Clinical Architecture’s data quality solutions provide a structural and semantic operating system that enables inferences to be used via API transactions. We’ve developed inferences that address all 12 CDC opioid prescribing recommendations and are making them freely available through standard web services. That’s right, there is no charge to use these opioid inferences. Simply send structured patient data to the stateless API (i.e., the API will not persist the data) and receive an immediate response.

Source: Seven Deadly Sins of Healthcare Analytics and How to Avoid Them. Webinar hosted by Clinical Architecture, February 13, 2018. 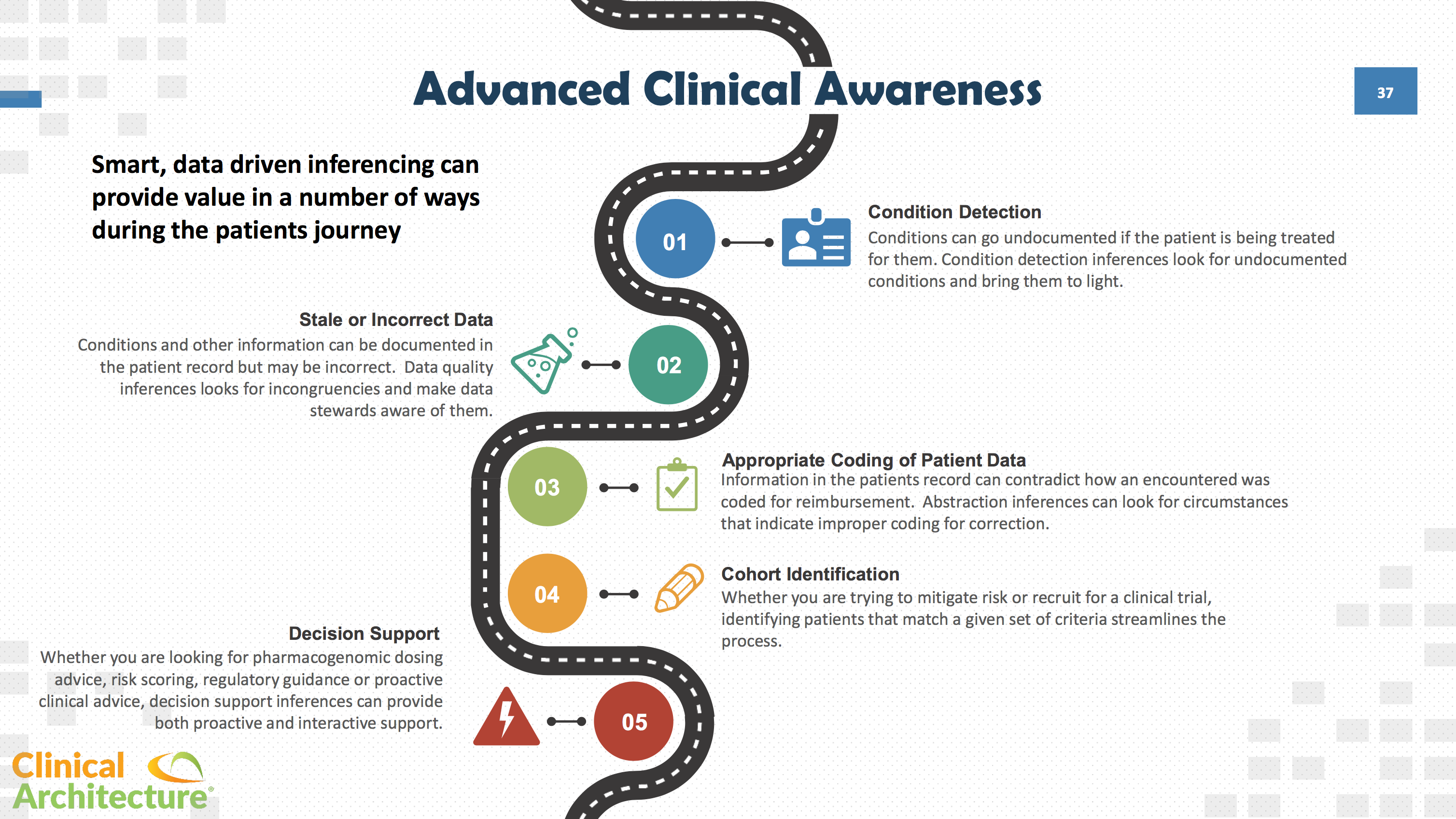 The opioid prescribing inferences can be accessed using any number of standard patient data structures including CCD, FHIR, HL7 v2, as well as any relevant proprietary format. The inferences also understand common terminology standards. Organizations can embed opioid prescribing guidance into a clinical or administrative workflow to achieve any of the following:

While there are policy, process, research, educational, and other approaches to addressing the opioid crisis, Clinical Architecture is attempting to be a part of the solution to the opioid crisis through the intelligent application of health IT. Regardless of whether you are a provider, payer, research organization, or any other stakeholder, if you think you can leverage our solution, simply contact us to get started.